A Very Special Cartier Basculante 2390 For The Australian Federation

Cartier aficionados are certain to salivate over the Cartier Tank Basculante. This intriguing variation on Cartier’s infamous Tank features not only exquisite design, but a unique swing case that allows the dial to be rotated and concealed from the view of the wearer. As exciting as it may be to have a Cartier Tank Basculante #2390 cross our threshold here at Baer And Bosch, the arrival of an incredibly rare Tank Basculante that was created to celebrate the 100th Anniversary Australian Federation drew a collective inhalation. Limited in production to only 26 wristwatches, this incredibly special timepiece is certain to cause skipped heartbeats among the horologically impassioned. Here, we will explore what makes the Cartier Tank Basculante #2390 so covet worthy, and what distinguishes the phenomenally rare Australian model from it’s slightly more prolific counterpart! 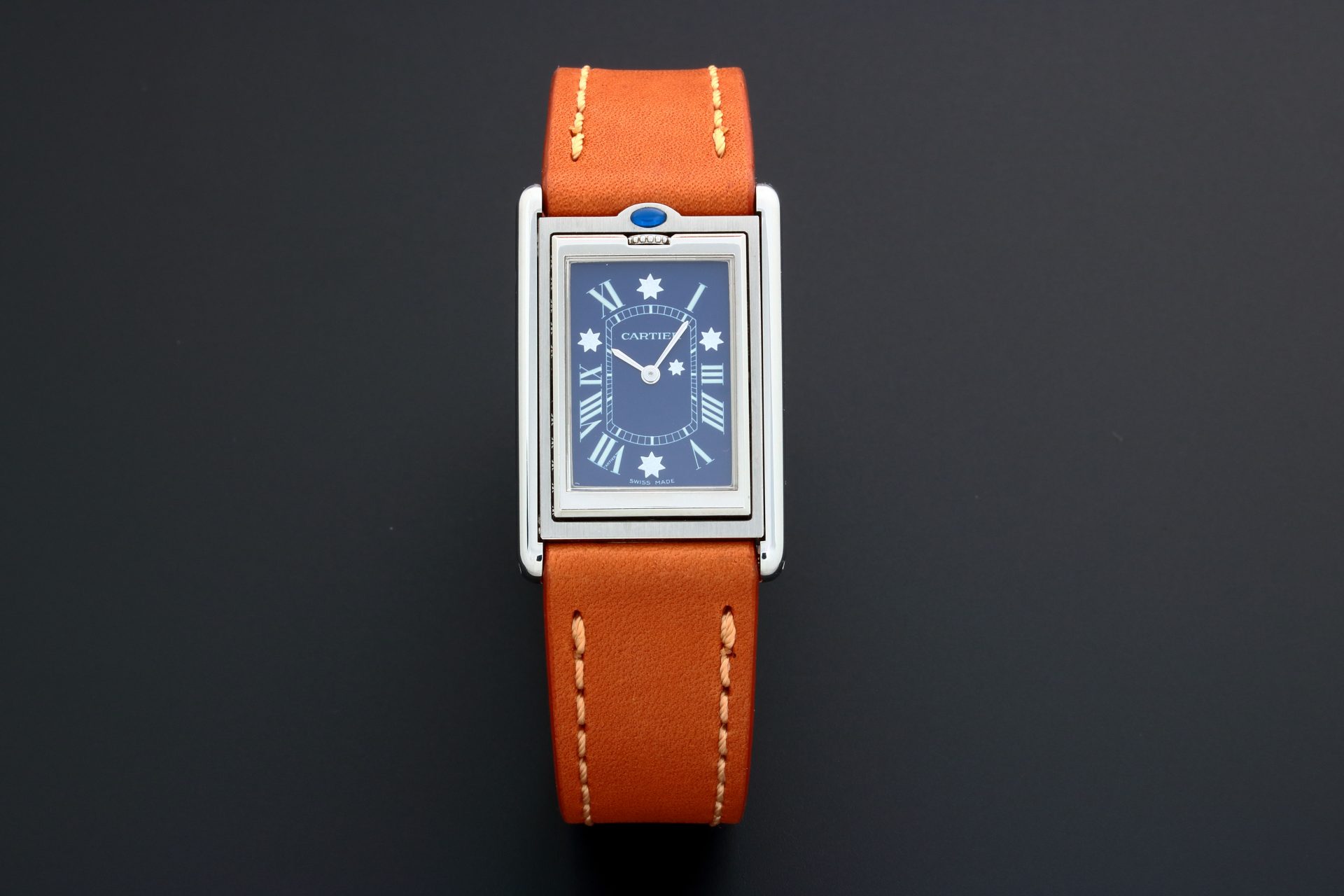 Beginning With The Backstory Of The Glorious Cartier Tank

In 1847, Louis-François Cartier took ownership of his very own Parisien jewelry workshop. A hugely successful family business that would span three generations took shape, and the Cartier brand expanded to New York and London. Royal warrants from all over the world gave prestige to this luxury brand, with King Edward VII of the United Kingdom ordering 27 tiaras from the brand for his coronation, and referring to Cartier as “the jeweller of kings and the king of jewellers.” Beyond mastery as jewelers, the Cartier brand began it’s foray into watch design in 1888, at a time when only women wore wristwatches, while men still favored the pocket watch.

In 1904, in parallel to the first royal warrant, Louis Cartier gifted a wristwatch designed exclusively for men to his friend, a Brazilian pilot named Alberto Santos-Dumont. This premier of Pilot’s watches was to begin a revolution in horological fashion. Leaping forward to 1917, Cartier launched the iconic Cartier Tank, serving as a tribute to the new Renault tanks appearing on the Western Front, and the Allied troops within them. This image provided inspiration for the Cartier Tank’s rectangular form. So celebrated was the Cartier Tank to become that it would become the timepiece of choice for celebrities and royalty ranging from Andy Warhol and Frank Sinatra to Jackie Kennedy and Princess Diana. 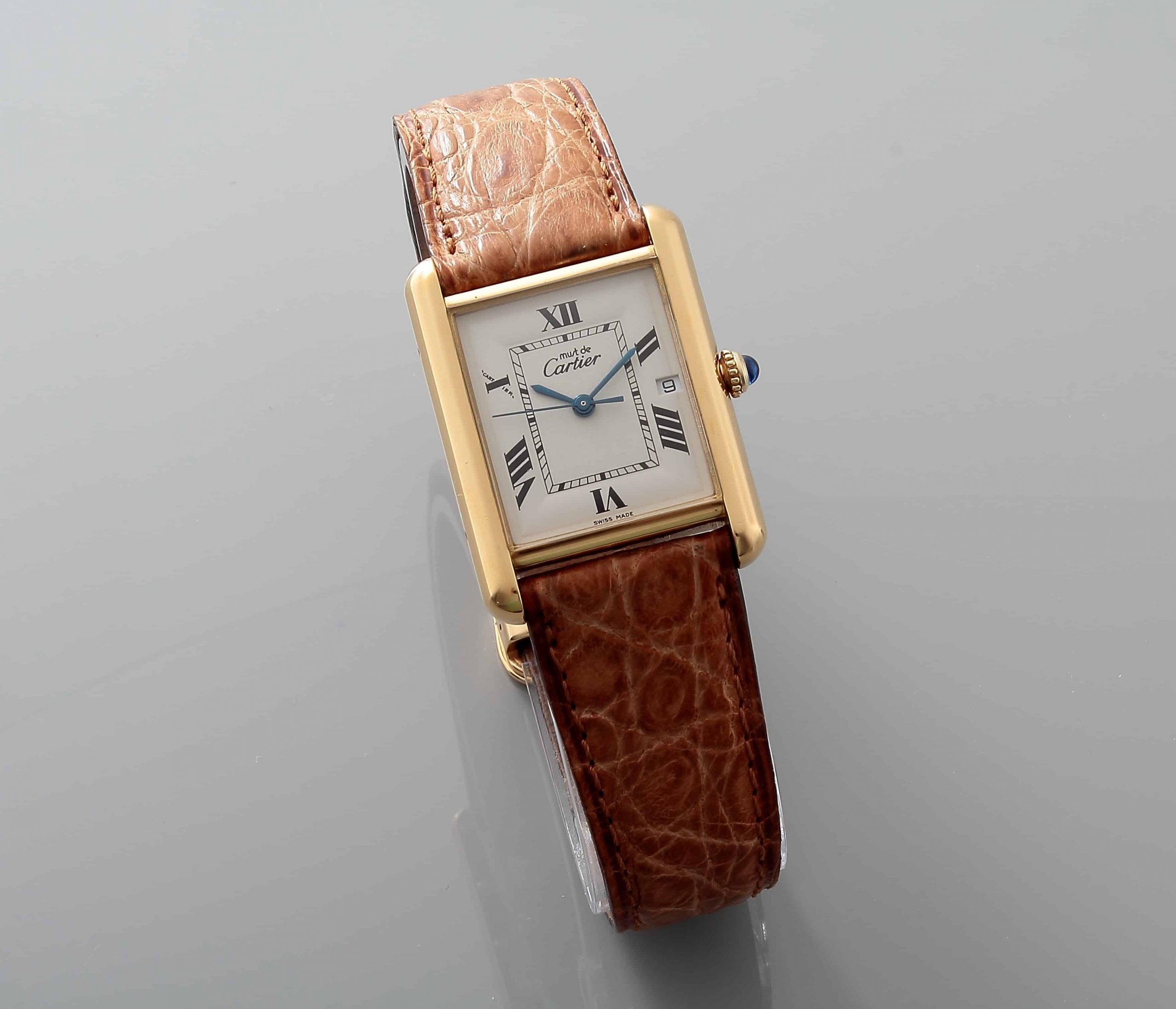 The Features Of The Cartier Tank Basculante #2390

The Cartier Tank Basculante “méchanique” is unquestionably best known for it’s reversible case, realized via an incredibly satisfying swing mechanism. This delightful variation on the ever-classic Cartier Tank features a finely decorated silver guilloché dial – employing a form of delicate mechanical engraving. It’s mechanical movement calls for manual winding The rectangular case measures 25mm x 31mm, and the case and bezel are stainless steel, with a solid case back. The dial features Roman numerals, and sits behind sapphire crystal. The keen observer can discover the Cartier secret signature at the 7 o’clock. 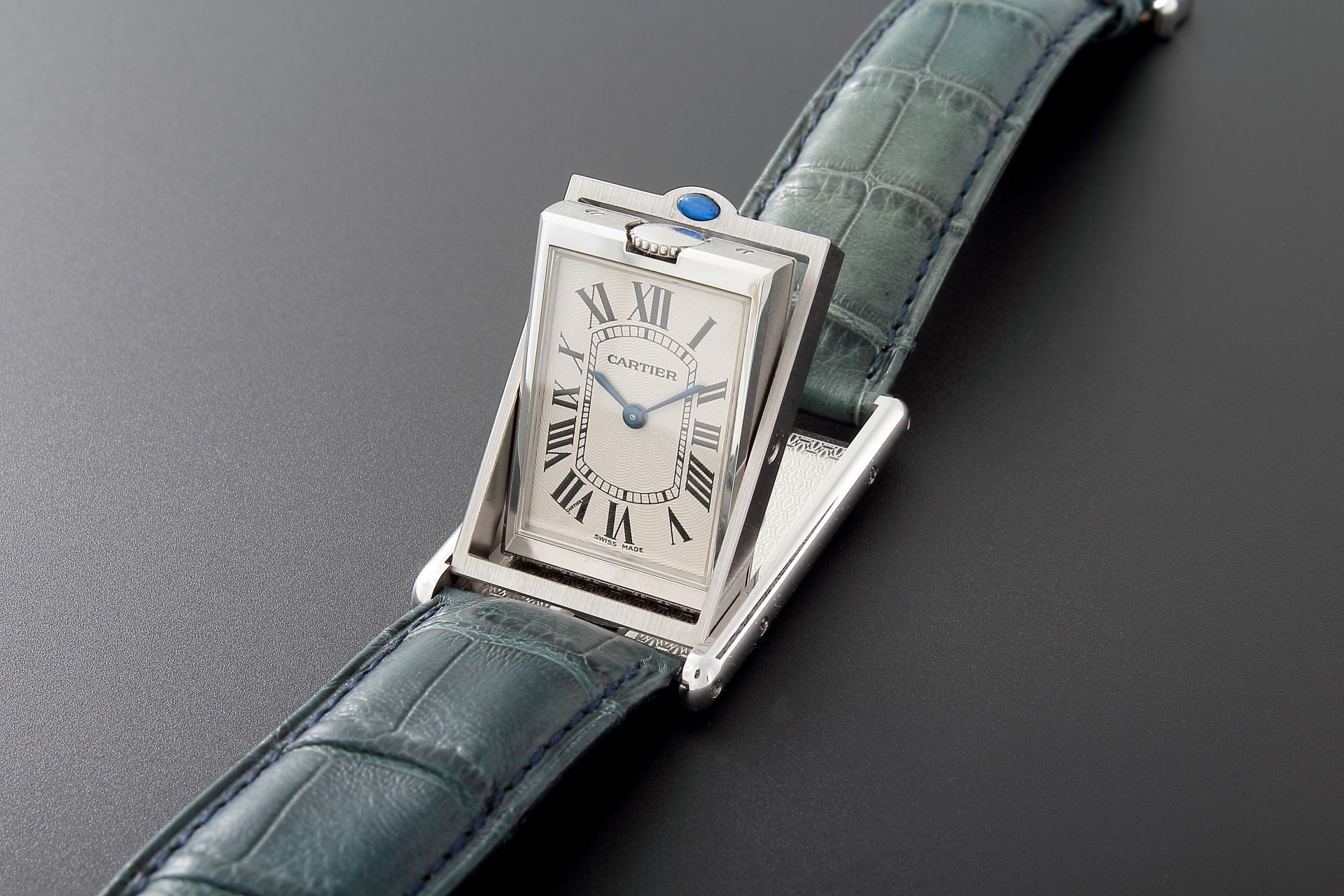 Seldom making an appearance in an auctioneer’s house, we at Baer And Bosch were thrilled to become directly acquainted with this exceptionally rare limited edition Cartier Tank Basculante #2390. Made solely for a highly exclusive Australian market, this timepiece served to celebrate the 100th Anniversary of the Australian Federation. On the reverse of the case, an engraving can be discovered that reads: “1901 – 2001 AUSTRALIAN FEDERATION 100TH ANNIVERSARY No xx/26”. This limited wristwatch shares most characteristics with it’s more prevalent counterpart, including the manual wind movement. Cartier did produce a few quartz versions, but this elegant collectible remains encamped within the mechanical subset. 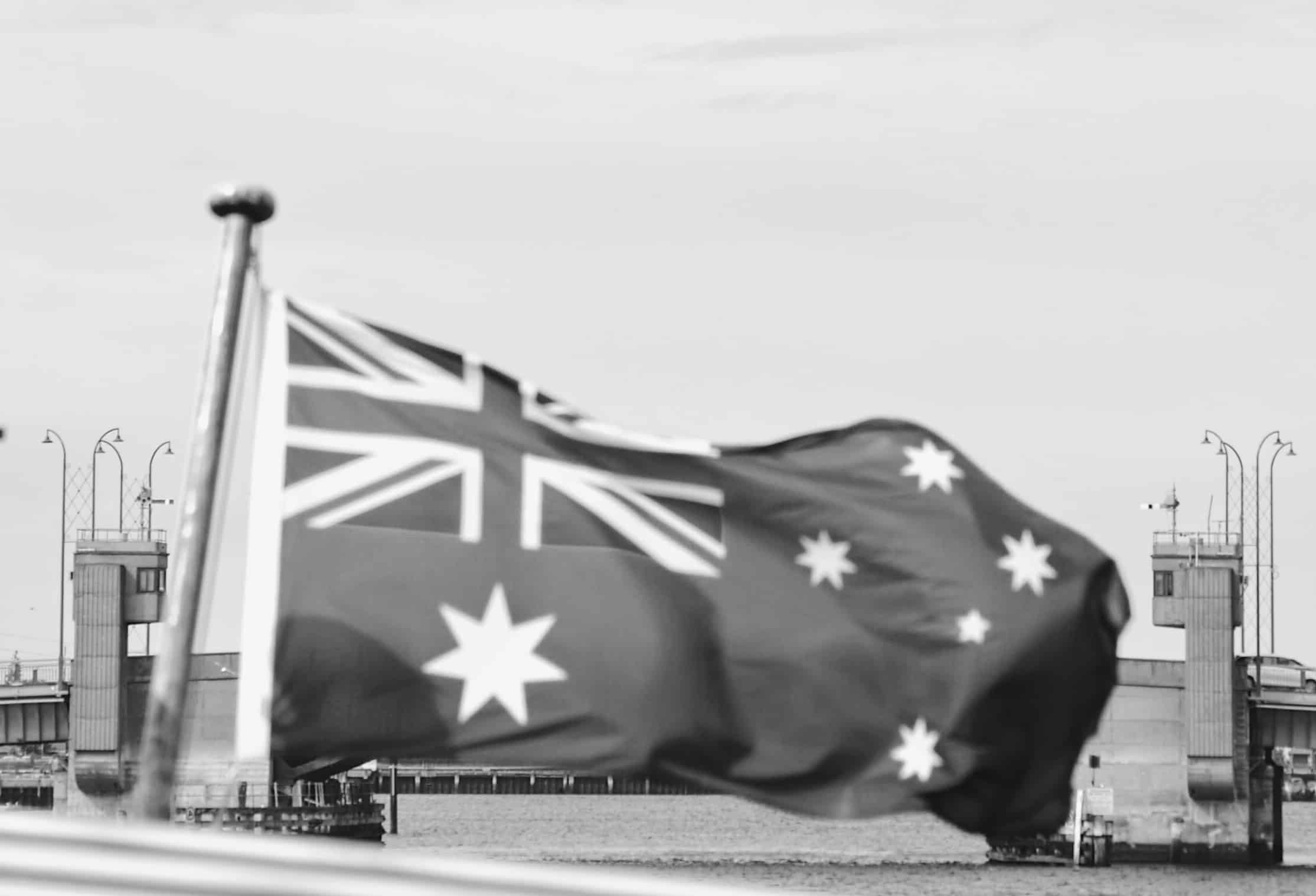 Where this version of the #2390 cuts it’s own path is in it’s dial. The deep blue color represents the Australian flag, while the stars offer tribute to the Southern Cross. This collection of stars is one of the most familiar star patterns to be seen from within the southern hemisphere. Comprising five stars positioned in the shape of a cross, the Southern Cross serves as only a part of the constellation Crux, which happens to be the smallest recognized constellation! With only 26 of these rarefied wristwatches ever made, we were delighted to welcome one of the 26 into our catalogue. We can only wonder when the next may may find itself available within the public domain. 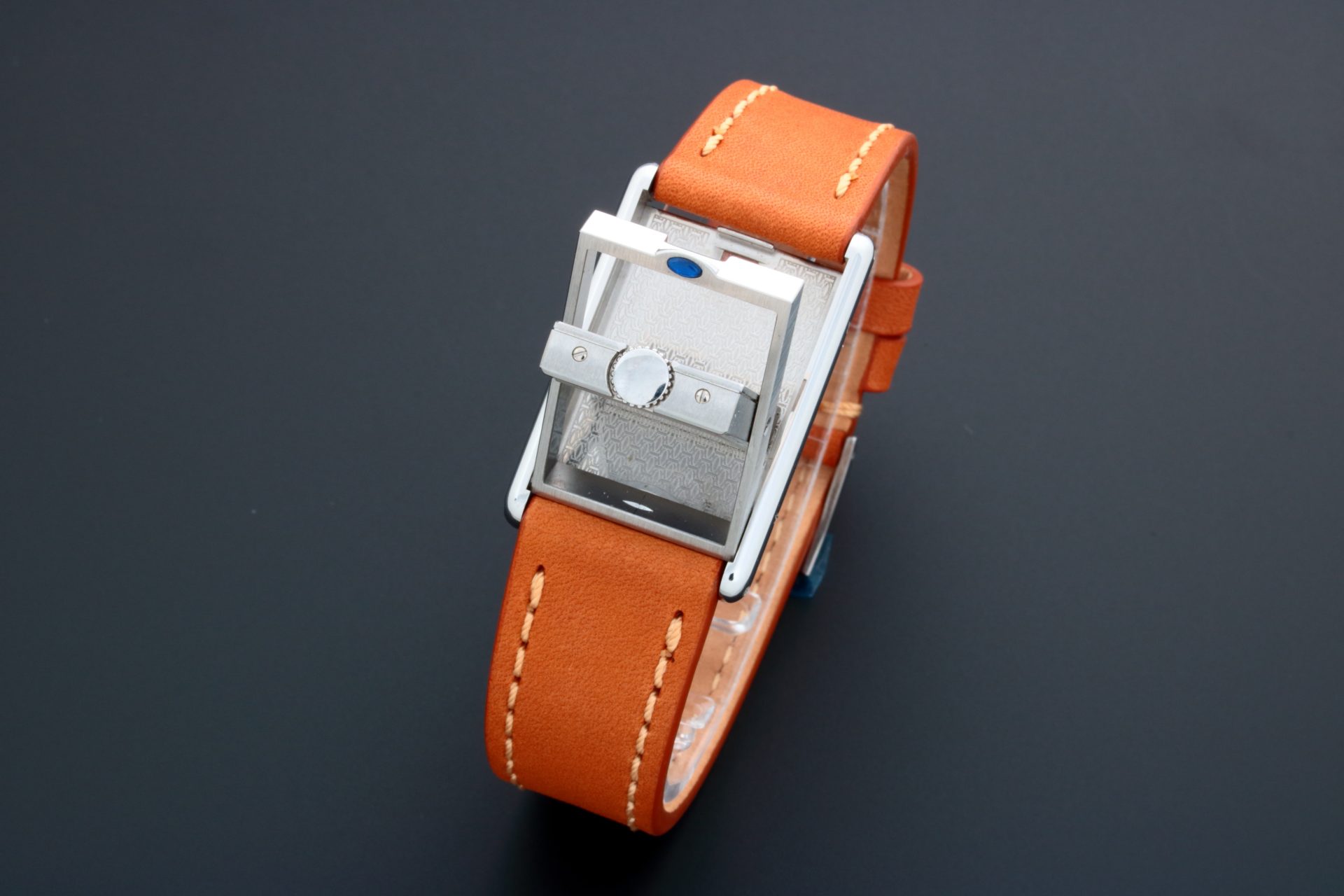 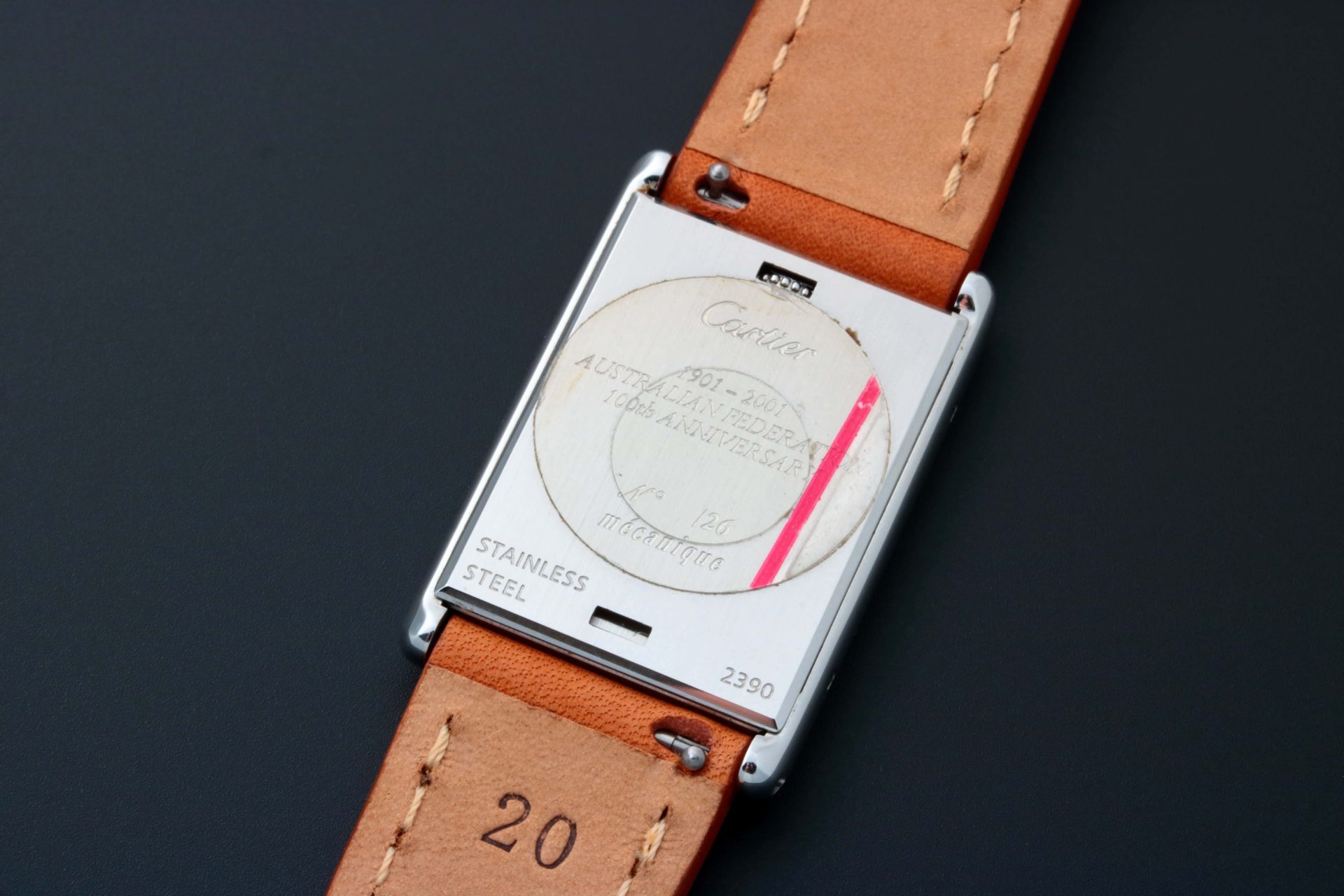 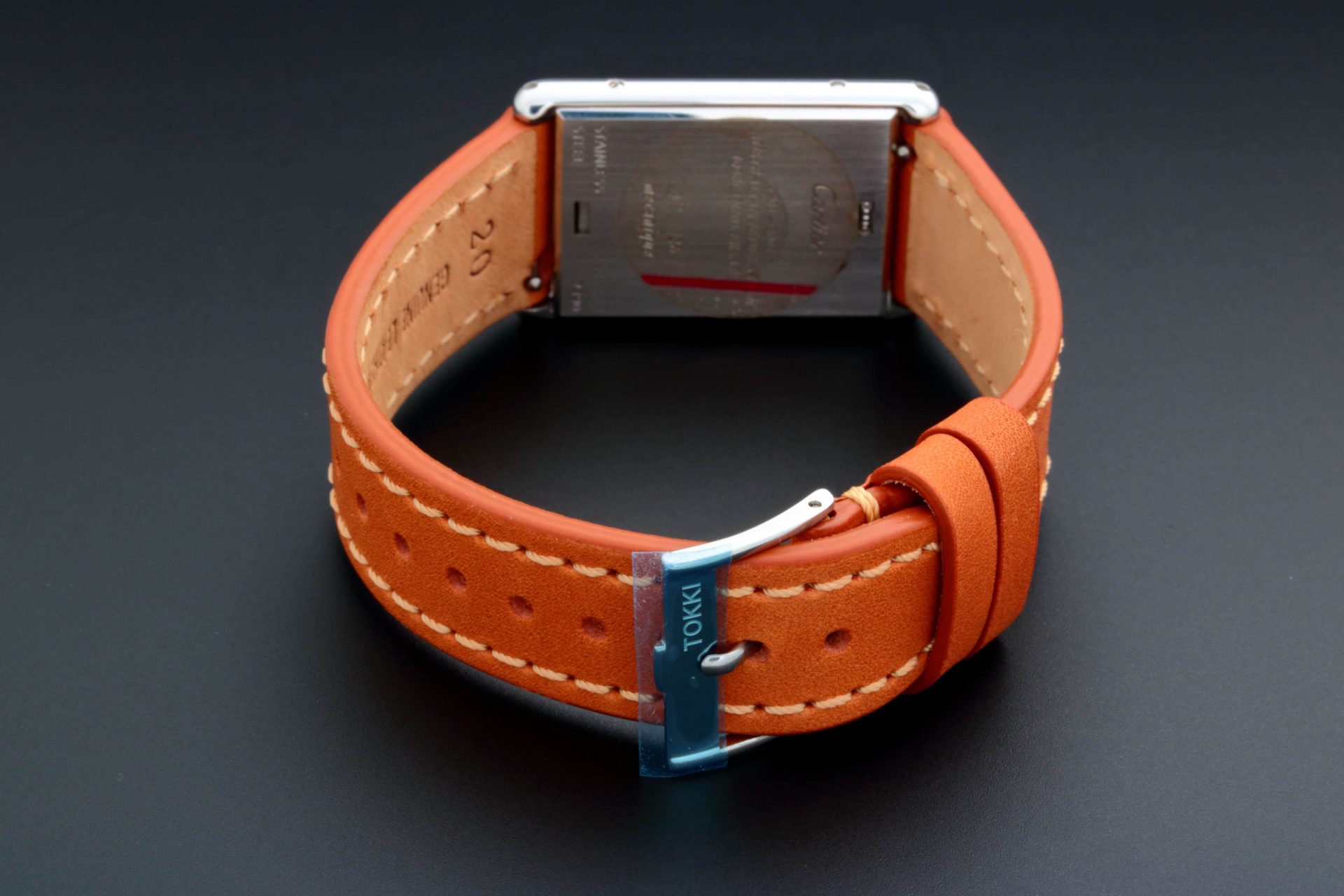