Never a brand to miss an iconic cultural moment, Omega’s Speedmaster is a watch that has melded with many historic events since it’s inception in the 1950s. From astronauts to pop stars, politicians and race car drivers, many famous faces have swung a Speedmaster on their wrist over the years. Among the highly collectible treasures within the Speedmaster legacy, the Omega Speedmaster A.C. Milan special edition wristwatches are among the most desired. Perhaps because of the heady passion of fans of both brands, this particular meeting of cult-status interests means that the A.C. Milan Speedmasters will be gracing the collections of horology enthusiasts for many years to come. Read on to explore more about the coveted Omega Speedmaster A.C. Milan #3510.51.00, and the leather strapped #3810.51.41.

“We will be a team of devils. Our colors will be red like fire and black like the fear we will invoke in our opponents.” — 1899, Herbert Kilpin

The Fascinating History Of A.C. Milan

Curiously, the football club was started by two Englishmen in 1899. Expatriates, Herbet Kiplin and Alfred Edward, famously enjoyed a heavy drinking session in the Fiaschetteria Toscana tavern in Milan, during which they decided on the inception of a football and cricket club, that would later evolve into A.C. Milan as we know it today. In honor of the merry gentlemen, the club retains the English spelling of the city’s name – Milan, an opposed to the Italian Milano. With eighteen FIFA and UEFA trophies under it’s belt, the fans of this club can be found far beyond the borders of it’s home nation.

The club’s home colors – red and black – have remained the same throughout history, and are perhaps the most recognizable within the sport. They were supposedly chosen to represent the team’s fiery spirit, and the opposition’s fear to face them. With an impressive track record of trophies, and a loyal following, the club enjoys being one of the most wealthy and celebrated in the world. For a taste of feisty Italian ardor, fans can go along to the “Derby della Madonnina”, which is what matches between A.C. Milan and their arch rivals Internazionale are known as. The two teams share use of the San Siro stadium, which boasts an impressive capacity of more than eighty thousand seats. 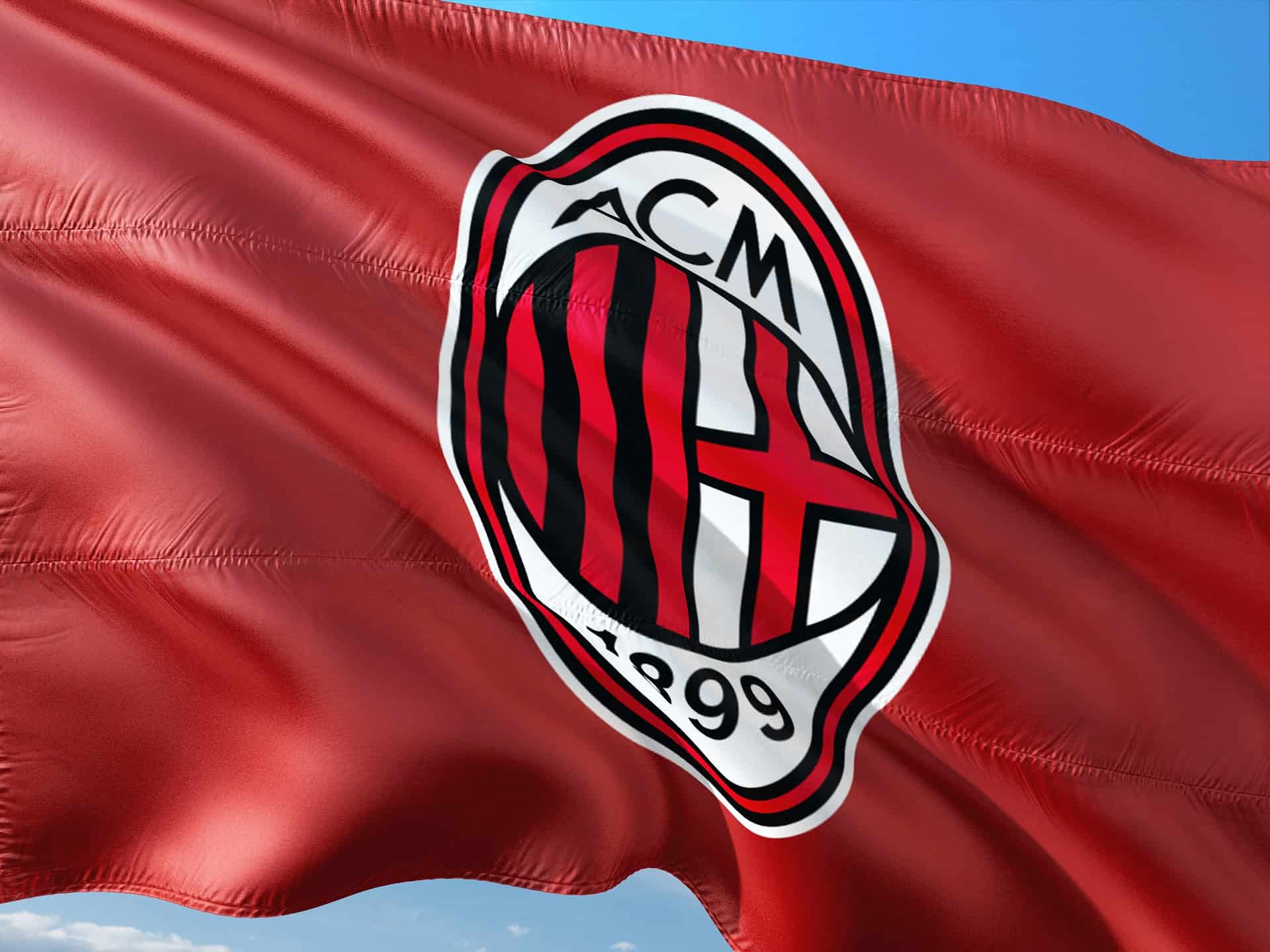 As one of the most beloved football clubs in the world, the 100th anniversary of A.C. Milan was certainly an occasion worthy of tribute. 1999 saw the release of this timepiece, coinciding with the end of a Millennium, and a time of cultural curiosity, and excitement. It’s hard not to think back to that moment without hearing the name-sake Prince song, or recalling Y2K hysteria! Making the wristwatch even more special was the limited volume of production, with each of the models produced to a count of only 1999 watches.The two models were supplied within a red leather Omega box, and accompanied by a special Omega Speedmaster Certificate booklet with the edition number matching the case back number of the watch. 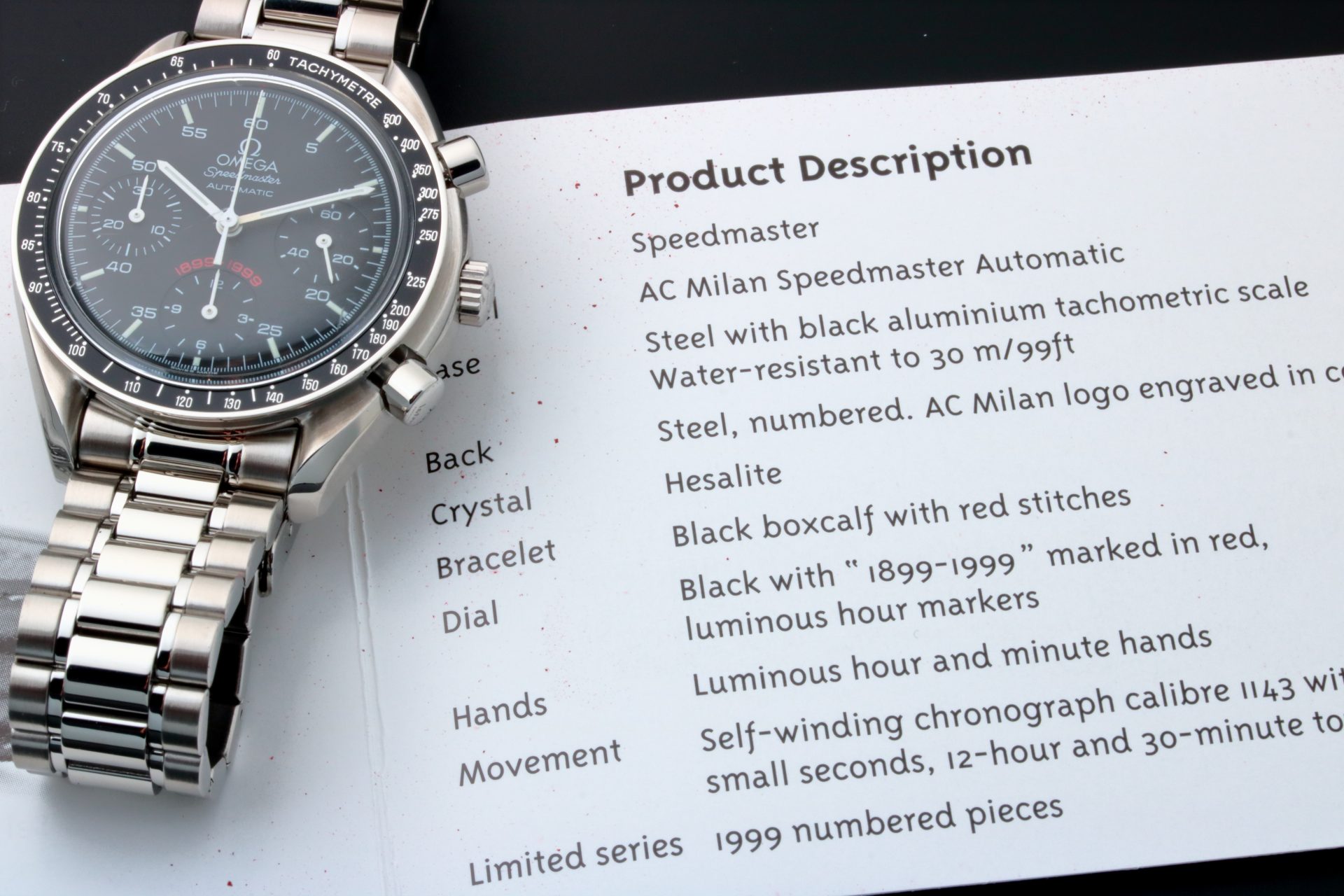 Only two models of the Omega Speedmaster A.C. Milan Football Club edition were released. The first – the #3510.51.00 – with a stainless steel bracelet, and the second – the #3810.51.41 – with a leather strap. The timeless dial features the centenary dates of “1899 – 1999” in red above the 12 hour counter at the 6 o’clock. The color scheme, of course, references the black and red of the football team’s home colors – and the white of their away stripe. The sub-dials layout on the dial features a 60 seconds counter at the 3 o’clock, a 12 hour counter at the 6 o’clock, and a 30 minute counter at the 9 o’clock. The bezel features a black Tachymetre, while the case back displays a football image, including the text “100 MILAN 1899 – 1999” in the center, with “Milan AC” engraved above, and “No. XXXX / 1999” engraved below. 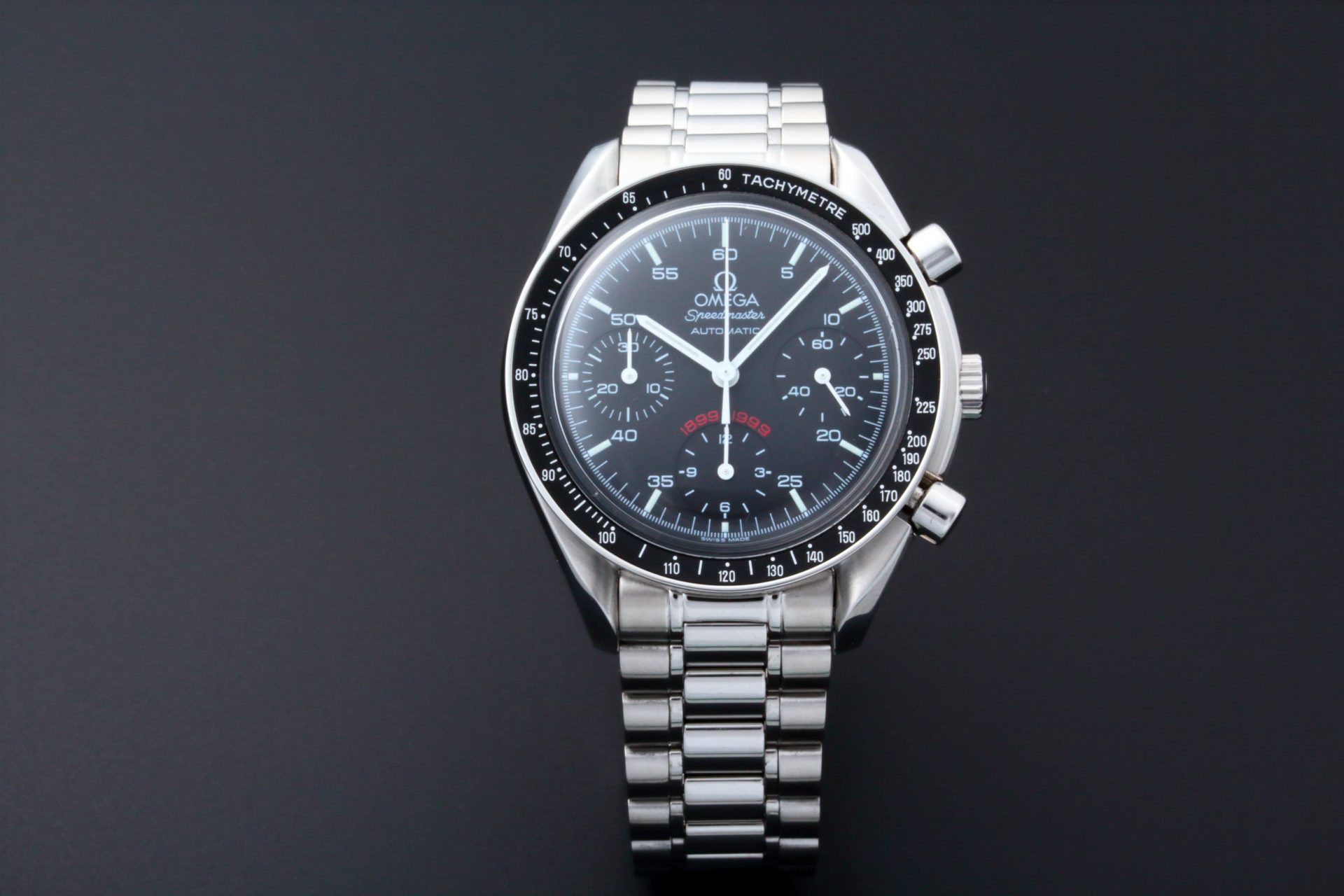 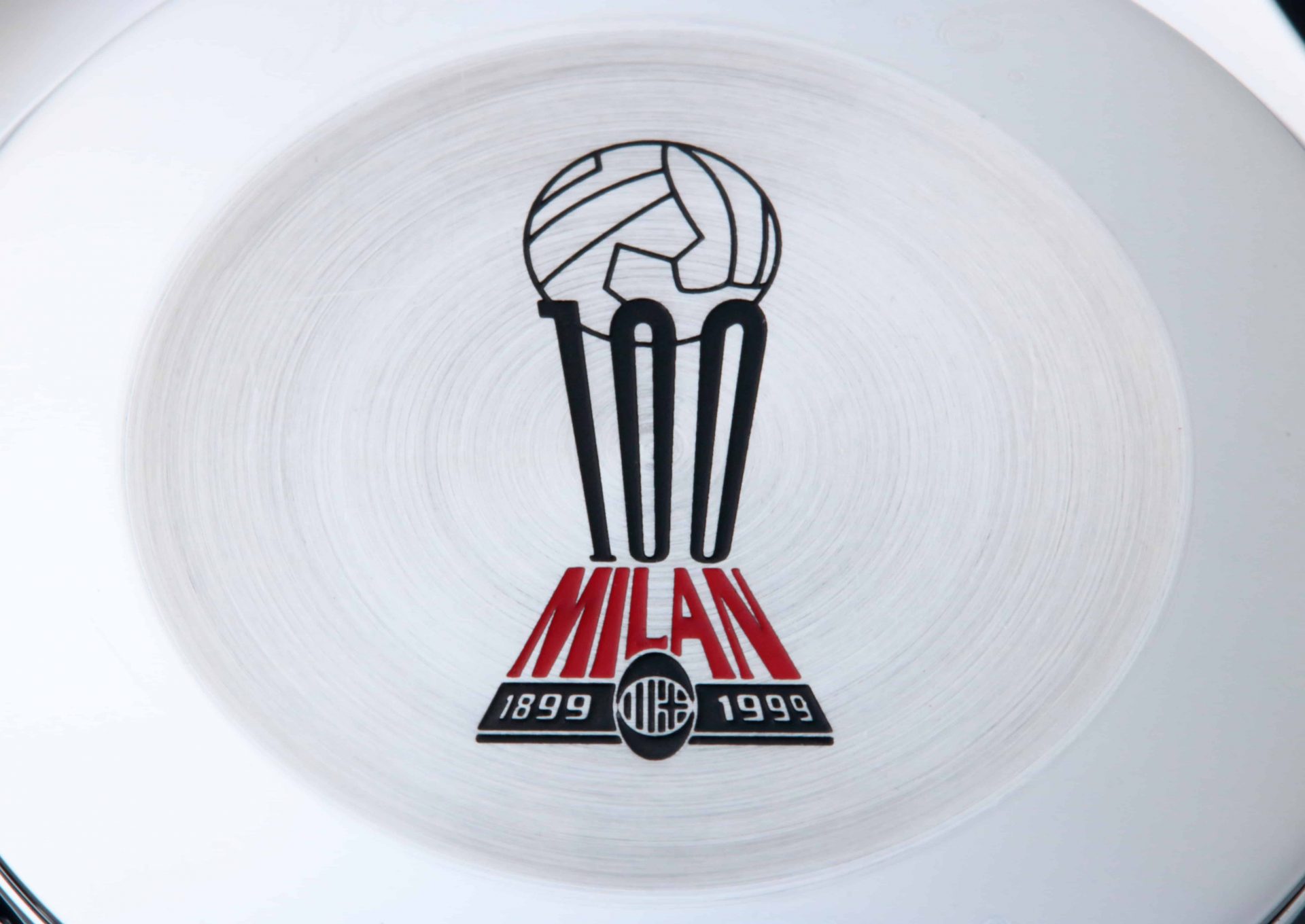 The Omega Speedmaster A.C. Milan boasts a caliber 1443 automatic movement, a 39mm diameter, and 30m water resistance. The serial range for both models is 565XXXXX. Differentiating the two models, the #3510.51.00 features a stainless steel bracelet, stamped #1469 and #811. Meanwhile, the #3810.51.41 comes with a strap in black leather. This unusual strap features raised twin ridges, red contrast stitching, and a contrast leather back. For lovers of football, iconic timepieces, or simply avid collectors of precious pieces of history, both models serve as an excellent collectible. Whether you are a long-term aficionado of horological treasure, or hoping to make your first purchase of such a desirable item, both of the Omega Speedmaster A.C. Milan Football Club edition wristwatches are certain to become a great source of pride. 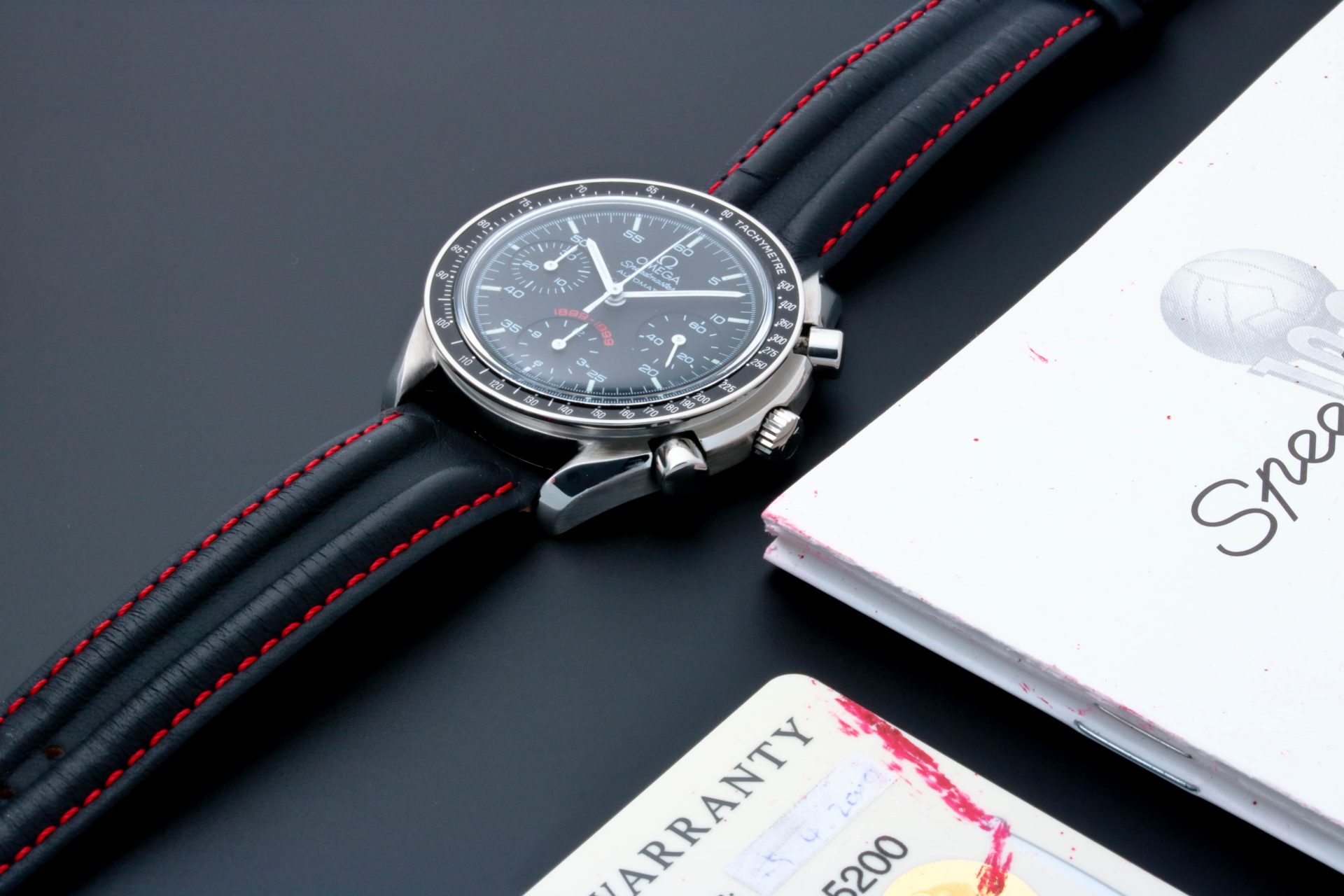 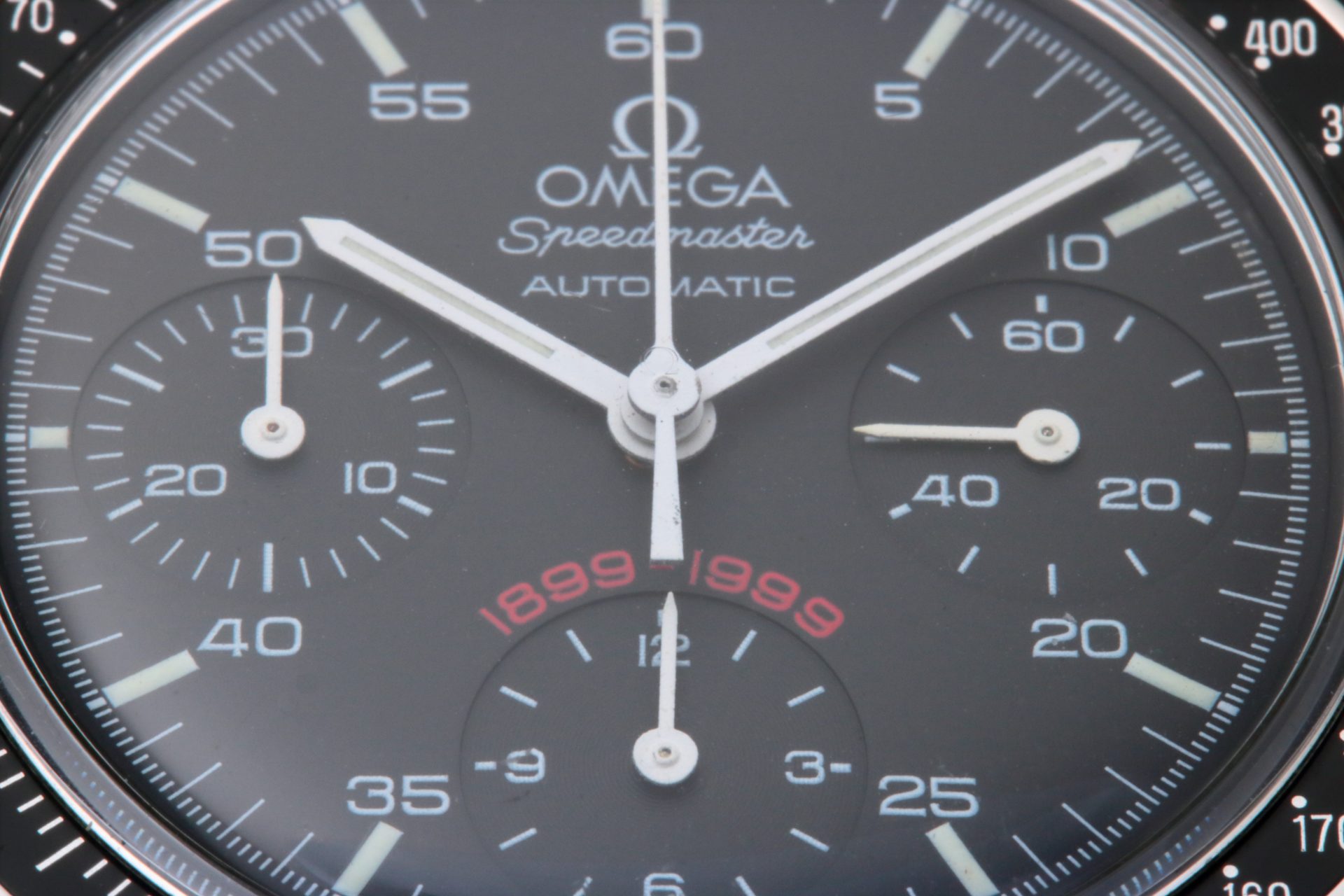 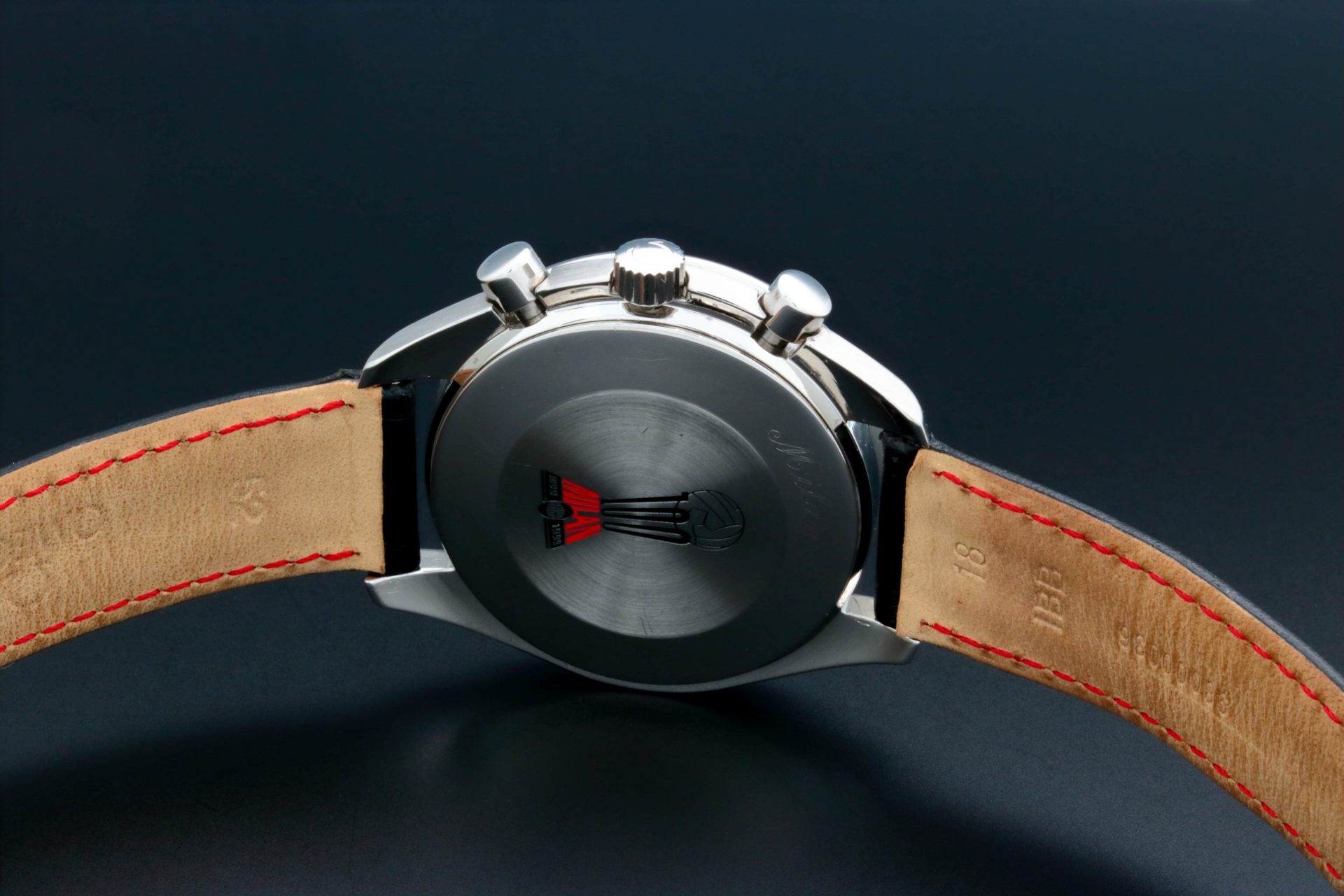 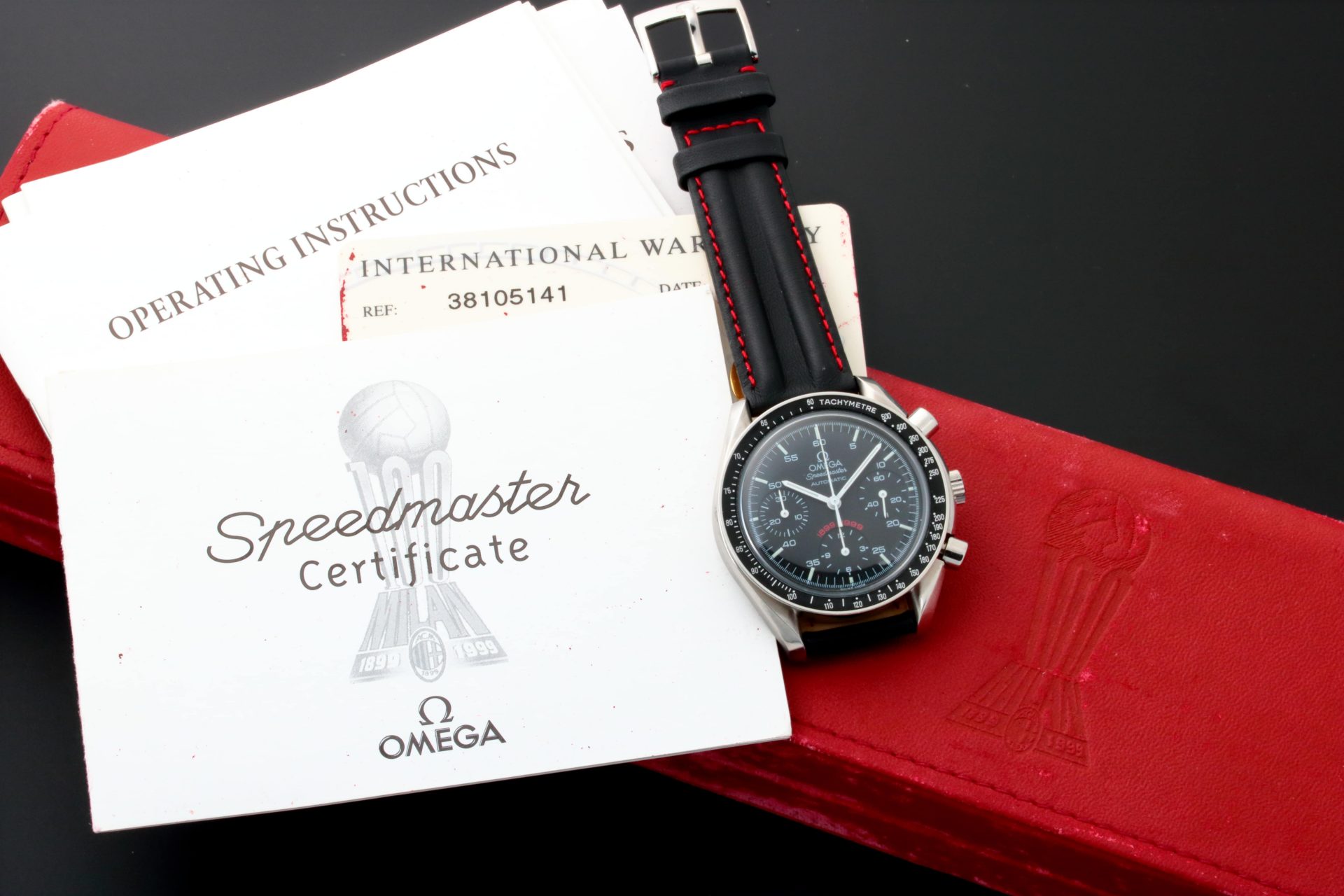