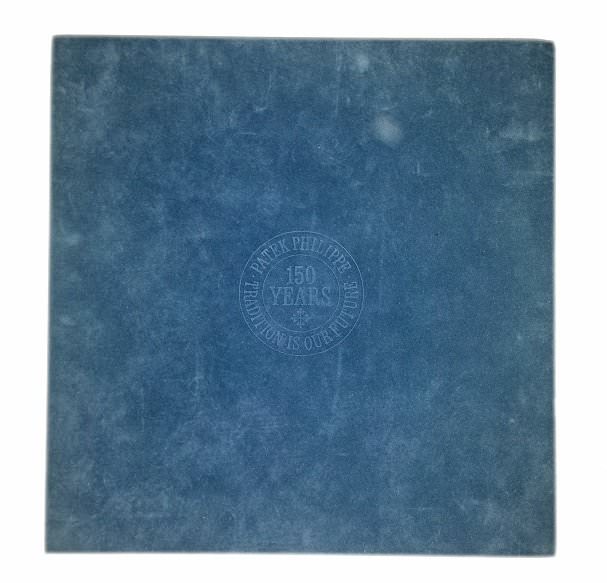 Title: Patek Philippe Tradition Is Our Future 150 Years. Le Temps et La Musique.
Author:  Patek Philippe: 150 Years Tradition is Our Future featuring music award winners – Juliana Gondek, Grzegorz Nowak, Hong-Mei Xiao, E.Krouchevsky, Leonid Gorokhov, Raphael Oleg, and Ricardo Castro.
Description: Rare vintage Patek Philippe “Le Temps et La Musique” vinyl set commemorating 150 years of music.  Seven vinyl LP record set with booklets for each of the seven winners of the 1980’s Patek Philippe music prize.  The winners were Juliana Gondek (soprano 1983), Grzegorz Nowak (conductor 1984), Hong-Mei Xiao (viola 1987), E. Krouchevsky (piano 1982), Leonid Gorokhov (cello 1986), Raphael Oleg (violin 1986), and Ricardo Castro (piano 1987).  Accompanied by a blue velvet presentation box.
Medium: Vinyl LP Records
Edition: 1980’s
Provenance:  Private collection
Condition: The exterior of the LP box has wear throughout from normal usage, age, and storage. The interior of the box is very good. The LPs appear to be in very good condition. The playing condition of the LPs is unknown.
Important Notes: We provide as much information as possible. Condition reports reflect our opinion only, to the best of our knowledge, and may not necessarily be complete.  All dimensions are approximate.  No guarantees will be given.  Photographs will count as part of the description with regards to visible attributes.  All property is sold  as is, where is, with all faults.  No warranties, express or implied will be given.

The exterior of the LP box has wear throughout from normal usage, storage, and age.  The interior of the box is very good.  The LPs appear to be in very good condition.  The playing condition of the LPs is unknown.